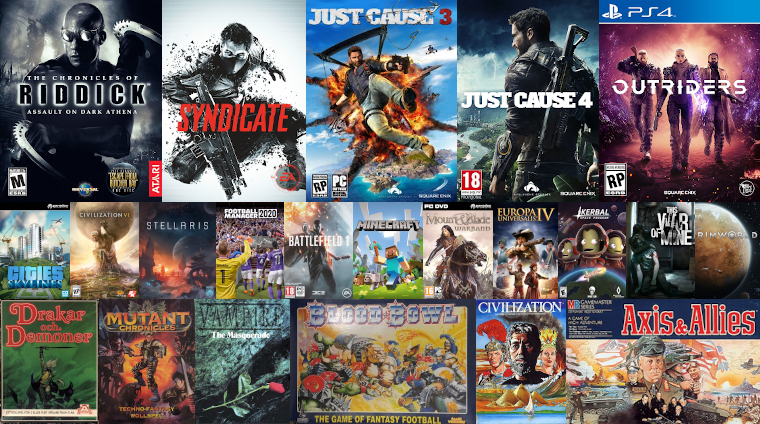 This is part two of the article that explores the games that made me the developer that I am today. What’s important to me in a game? What type of games do I want to make and play? I recommend reading the first part of this article before you continue.

My early video gaming days were dominated by Nintendo. Mario, Zelda and Metroid were the go to games for me and my friends back then. I did have a C64 that we played on as well. I even made some unsuccessful attempts to develop my own games on it. But the games for C64 never measured up to the ones for NES when it came to quality and fun.

When I received an SNES for Christmas, the C64 started collecting dust. Around the same time my dad got a home PC for his work. I immediately started playing games on it, to the extent that he eventually got me my own PC. This opened up completely new gaming possibilities, and it had a huge influence on me when it came to strategy, management and simulation genres. I remember those games fondly and I still play very similar ones today.

I have to mention my interest in tabletop roleplaying games and to some extent live-action role playing and boardgames. This took up a lot of my time when I was a teenager. I received Drakar och Demoner (Swedish fantasy roleplaying game) as a birthday present from my mother when I was 11. Ever since, I have been hooked!

My friends and I started up and ran two gaming clubs in the 90’s with the help of Sverok. There we played everything we got our hands on. I was usually the gamemaster if one was needed, but occasionally I got to play as well. Some of my favorites games back then were Drakar och Demoner, Mutant Chronicles, Vampire: The Masquerade (tabletop and live-action), Blood Bowl , Civilization and Axis & Allies. I believe my enjoyment of emergent roleplaying in games comes from this time in my life. I still love tabletop roleplaying and I have The Expanse and Tales from the Loop in my bookshelf waiting to be played.

The Elder Scrolls II: Daggerfall and Fallout 1 and 2, were the first role playing games that I feel came close to a good roleplaying experience in digital format. Since I was typically the gamemaster when my friends and I played tabletop RPGs, I enjoyed these games extra much. For me, the key to a good RPG is freedom. I rarely care about the story, and I usually don’t even complete the main story in an RPG game.

During the first half of the 00’s I was busy with my university studies and my gaming time dropped considerably. I worked on a few smaller game projects as part of some of my computer science classes. But up until 2005 I didn’t have any serious plans of making game development my career. However, World of Warcraft and Grand Theft Auto: San Andreas changed that, something in those games ignited my passion for game development.

Once I got started in the game development industry, my gaming changed to reflect the projects I was working on. Mostly shooters with focus on co-op and multiplayer. As a perk, Starbreeze gave everyone an Xbox360 or PS3 for home. This led to the Xbox360 becoming my primary gaming platform from 2007 until some time in 2011. Gaming was now part of my job, and not necessarily entertaining and relaxing.

When I moved to the US in 2012, my gaming changed again. Instead of playing games for work, I started playing them for myself. While I was developing AAA action at work, I was predominantly playing strategy and simulation at home. And my new dream changed to develop an RPG, simulation or strategy game.

How I Play Games

When I can, I play slowly. I like being strategic and calculating. I like fantasizing about the world and the people in it. Think things through, pause and divert my attention to my wife or the cats when needed. This is why I prefer single player over multiplayer games in most cases. I played only 4 out of the 22 games on my list in multiplayer, and out of those 4 I only play 2 regularly nowadays.

Half of the 22 games on the list I still play regularly (marked with an arrow in the timeline). Some of those games are part of a series that come out with new updated and improved versions. But even with that in consideration, they all have incredibly high replay value, which makes me come back to them.

My combined gaming time of the 22 games on the list is more than 12,395 hours. That’s 310 forty hour work weeks, or about 7 years of full time work spent on playing them. In addition to that, I have played plenty of other games as well. However, I do work as a game developer, and playing games is my main form of entertainment. This does show that I spend a lot of time with the games that I enjoy and they keep me interested and engaged for a long time.

Personally I have a hard time being evil when I play. It can be fascinating, but I can’t get invested in the same way as I do when I play nice. However, having the option there to be bad, makes it much more satisfying to be good. It’s even better if a game reward being bad more than being nice, unfortunately few games dare to do this.

I am almost exclusively a PC gamer today. The games that I enjoy playing are all PC based. My childhood and early teens were Nintendo dominated and I had my Xbox 360 period during my time at Starbreeze. But I have never had a Playstation. The big Playstation games tend to be story driven action blockbusters. They are well made, polished and popular, but they don’t interest me.

A relatively modern form of entertainment is to watch people play. Strangely enough, I really enjoy this! It started as a thing I did for work. It helped me understand how other people played a game, and  it saved me from playing a game myself. But now I also watch streamers and youtubers play games that I play myself. It becomes a passive form of entertainment, with two layers of stories. One layer from the game and another one from the person playing the game. This will never replace playing games for me. But it’s a practical tool for me as a game developer and it’s an entertainment form that I occasionally like to consume.

Games made by me

The bigger games that I have professionally been part of developing, have mostly been action shooters. From first person corridor shooters to third person open world action. A mix of singleplayer, multiplayer and co-op games.

This list is radically different from the games that I enjoy playing. However, I did learn a lot working on AAA shooters and action games. And they did shape me as a developer, especially when it comes to quality, production, stability and optimization.

I already have a clear vision of the games that I want to make. For way too long I have been developing games that I don’t necessarily enjoy playing myself. That is about to change!

The genres that I will focus on are strategy and simulation with elements of RPG. I will encourage and support creativity and emergent roleplaying as much as possible. In a crowded indie game market, I think there’s space for this type of game. This also happens to be my favorite type of game to play.

I do want to make as big and impressive games as possible, but scaling the games according to available resources is critical. This has to be reflected in the concept, design and production of the game. Visually, a unique look that supports the gameplay and is affordable will be more important than perfection and high fidelity.

I will lean into my strengths as a veteran gameplay programmer and focus on systemic gameplay. This goes hand in hand with the type of gameplay that I like, the genres that’s my focus and the replayability I strive to create.

Looking at the games that have made me into the game developer I am today, we can draw some distinct conclusions. There’s a disparity between the games I have been developing and the games I enjoy playing myself. This is something that I am changing by creating my own game company.

Story is not of great importance to me, but the setting, the world and lore is. I rarely finish a story driven game and a set story tends to remove freedom and choice from the player. However, the story that I make during my journey in a game is vital, almost every game on my list gives the players the opportunity to do this.

Art and music are extremely important! Thinking anything else is delusional. But a game doesn’t need the best lighting, most high res models or smoothest animations. Instead, the art and music have to be there to support the gameplay, the world and setting. Giving just enough to kickstart the imagination can be so much more powerful than painting the entire picture.

Gameplay is king! The core gameplay needs to keep me interested and wanting to play more. A good, solid and well polished experience is always appreciated and preferred. However, perfection is overrated, and many games that I play have huge flaws but I love and play them anyway. Originality and connecting the gameplay to the world and setting is much more important.

I enjoy systemic games that encourage creativity, exploration and discovery. Such games tend to also support great freedom and choice for the player. Solving problems with your imagination and intelligence is so much more satisfying than shooting your way out of trouble.

The genres that I prefer are strategy, simulation and RPG. Games that manage to blend those genres, I like even more. I am much more likely to enjoy and stick with a game that touches any of these genres.

I will continue playing for fun, relaxation and work. Hopefully, I will be able to mix work and fun, making games that I enjoy developing and playing.